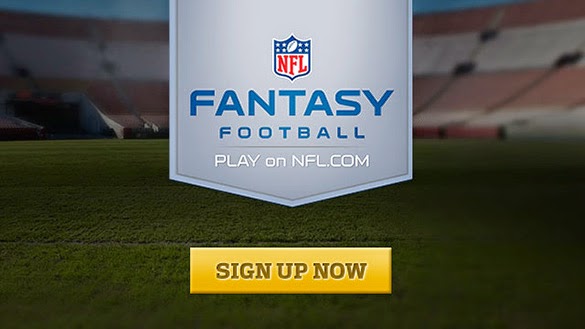 NFL.com kicks off their 2014 fantasy season with league drafts on June 26th. NFL.com has also included a number of new features for the upcoming season.

NFL.com's growing fantasy games now ranks 3rd in terms of of unique visitors, according to Nielsen. The is places them in a virtual dead heat with CBS Sports fantasy game, however users of NFL.com spend nearly 3 times as long visiting NFL.com than CBS Sports with a per visit time of 1 hour and 53 minutes versus a CBS Sports time of 41 minutes.

For 2014, NFL.com is touting a number of upgraded features. Mobile apps lead the list of new things with the ability to track live score, manage lineups such as adding/removing players and proposing/accepting trades. Owners can also receive fantasy alerts via text message.

NFL.com has also changed the main user interface with the claims that it is faster and more streamlined. In addition, there are also improved research tools to help owners setup their team's roster. The site is also promoting advanced stats that will be exclusive only to NFL.com fantasy.

Finally, NFL.com will be providing community engagement with the Fantasy Genius Community that will help fellow owners communicate with question and advice as well as providing access to the ranking leader board for owners.

FtSb says: Mobile is a key platform for fantasy sports and especially fantasy football that the NFL looks to tap into. Although mobile may not be the best devices to research and conduct drafts, mobile is ideal for the in season and weekly game management for owners. NFL.com fantasy football can serve dual purposes as a marketing tool as well as legitimate platform for its advertisers. From the marketing tool perspective, it can bring in more users to play fantasy football, however what I think is also key is for NFL.com to control the branding of fantasy football itself. With the rise of daily games, the juxtaposition of daily games to gambling could deter the growth of football. Thee NBA and MLB could learn from the NFL's lead here in hosting their own fantasy game rather than rely on the Yahoo!, ESPN and the emerging daily games like FanDuel to control their fantasy sports brand.
at Tuesday, June 17, 2014
Labels: Business, Game Provider, Season Leagues
Newer Post Older Post